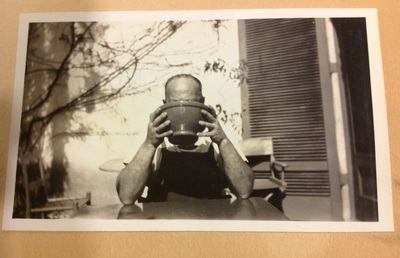 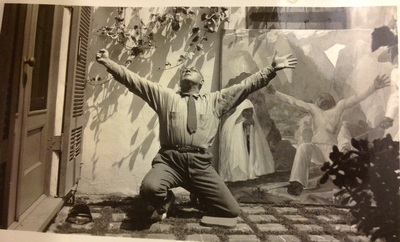 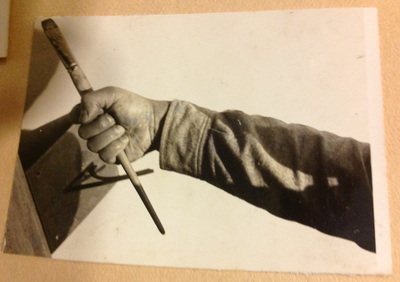 Images from Ballin Archives, UCLA Special Collections
Hugo Ballin at Work
Hugo Ballin was an artist, muralist, silent film director and art director at the Warner Brother Studios. When Rabbi Magnin decided to incorporate murals in the new Temple,  members Jack, Harry and Abe Warner donated the services of Ballin who worked on the paintings in his studio in Pacific Palisades. The murals were painted on large canvases,  transported to the Temple and affixed to the walls.

Ballin was born in New York City to  German Jewish parents. He studied at the Art Students League of New York, and later studied art in Italy. Ballin created 26 murals around the country; in Los Angeles you can also see his work in the History of Science murals at the Griffith Observatory.

In a book written about the Warner Murals, Ballin wrote, “The richness and abundance of subject matter made the selection of incidents to be depicted difficult. The individuals depicted have no pictorial prototype. It was therefore necessary to create composite characteristics which would be convincing.” 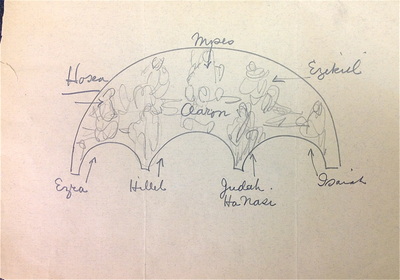 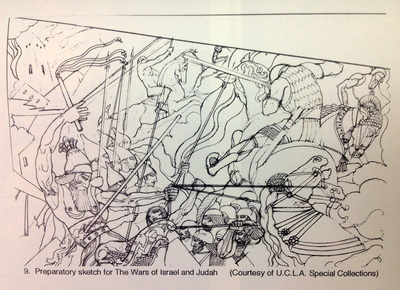 Preparatory sketches by Ballin showing the Eastern Lunette representing Prophets, Priests and Rabbis of Old and the Frieze section of the Wars of Israel and Judah.  From the Wilshire Boulevard Temple Archives 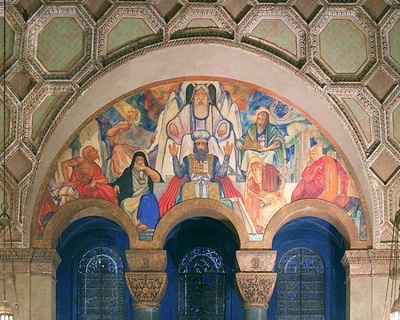 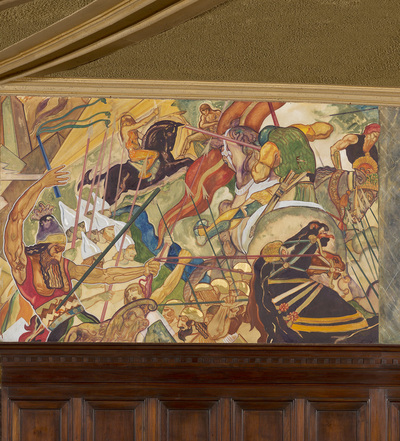 Completed and restored mural sections showing the Eastern Lunette and Frieze section of the Wars of Israel and Judah. Photographs by Tom Bonner
Rabbi Magnin worked very closely with Ballin in selecting which parts of the Jewish story to tell, and how to visually convey them. Night after night, Rabbi Magnin would meet with Ballin and plan the subjects for the paintings. Magnin wrote out his own detailed notes as he decided what was important to  include in the murals. 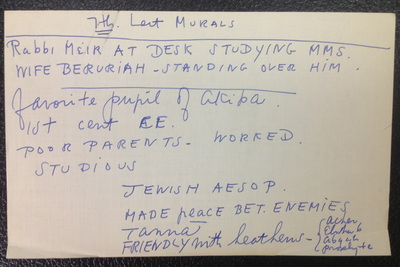 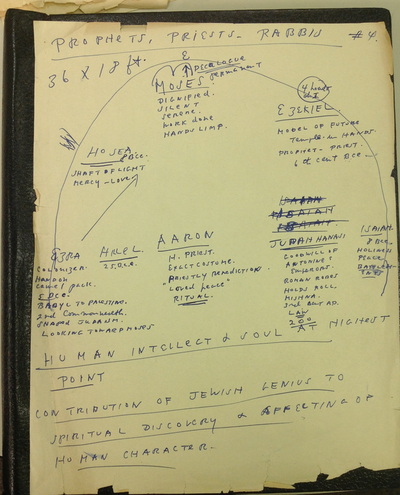 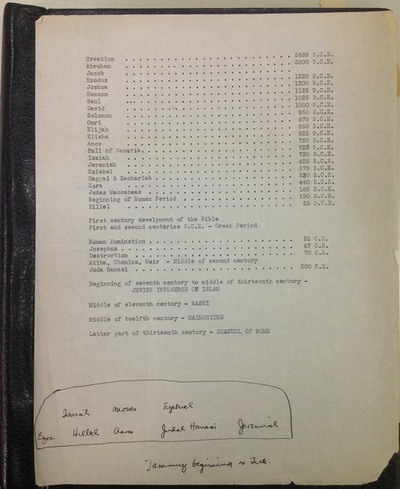 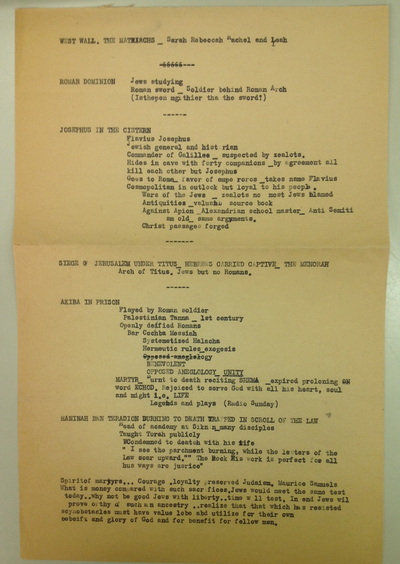 Handwritten notes by Rabbi Magnin mapping out the content of the murals.  From the Wilshire Boulevard Temple Archives. 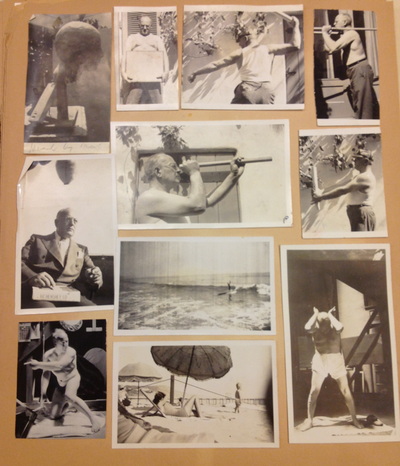 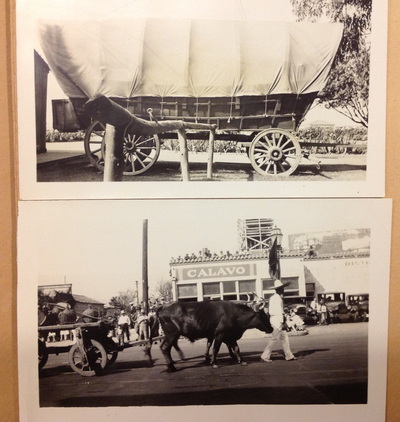 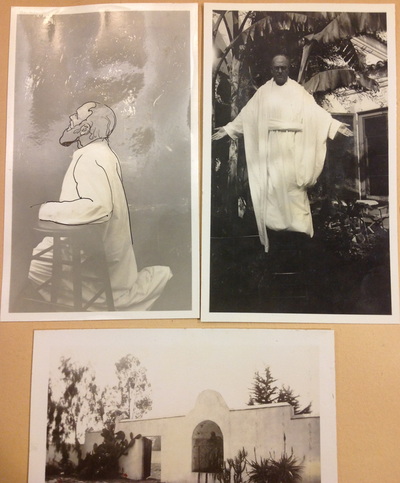 Ballin's scrapbooks and sketches from his many mural project, now housed in the Special Collection Archives at UCLA, show how he worked.
Images from Ballin Collection, UCLA Special Collections
Ballin himself modeled the many strong gestural poses that he needed to refer to while composing his murals. With an assistant taking the photos he dressed up and used props that he would later paint. Ballin  also documented people, animals  and objects, like the wagon and bull below which he could later draw from. We can see from his scrapbooks that he would draw over the photographs clarify the contour lines for his paintings.
Ballin's preliminary sketches also show that he worked out his color selections in advance. He labeled his rough drawings with his choices, as shown below in the two sketches from other mural projects. 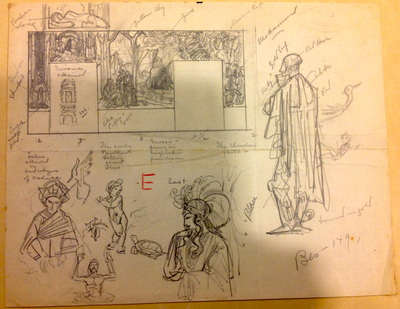 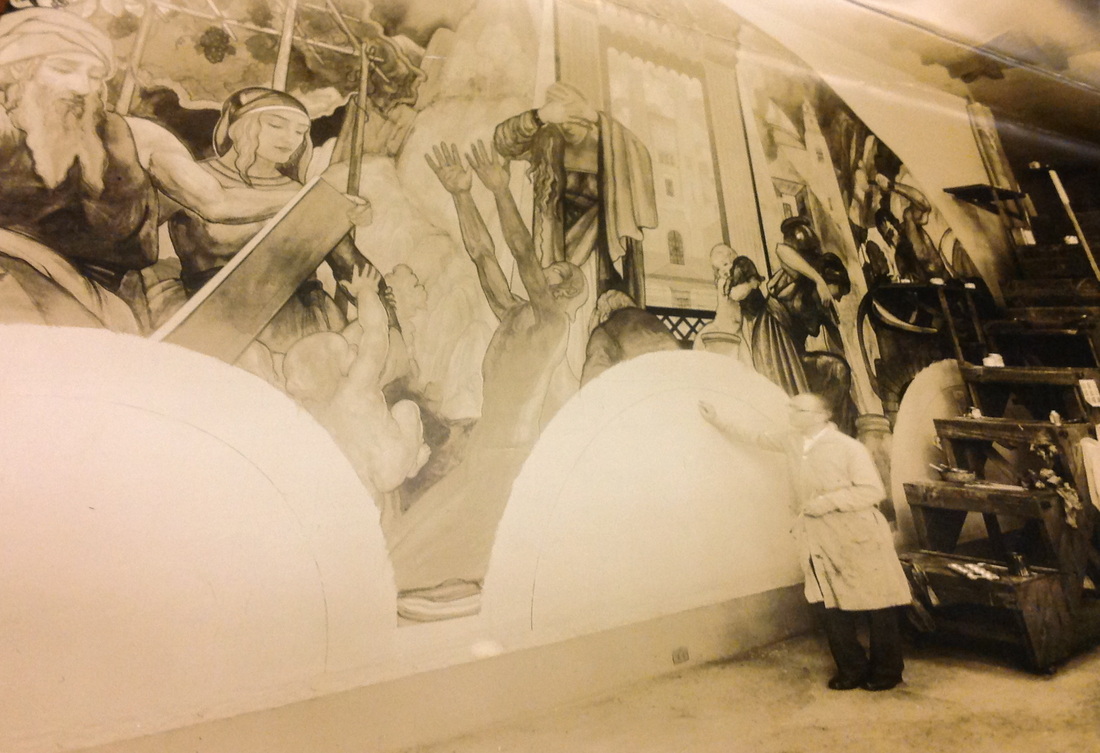 This photograph of Ballin at work in his Pacific Palisades studio shows the scale of the painting on canvas. This section of  the Western Lunette depicts the Messianic Age. Note the movable steps to the right which enables him to reach the top.
Images from Ballin Archives, UCLA Special Collections 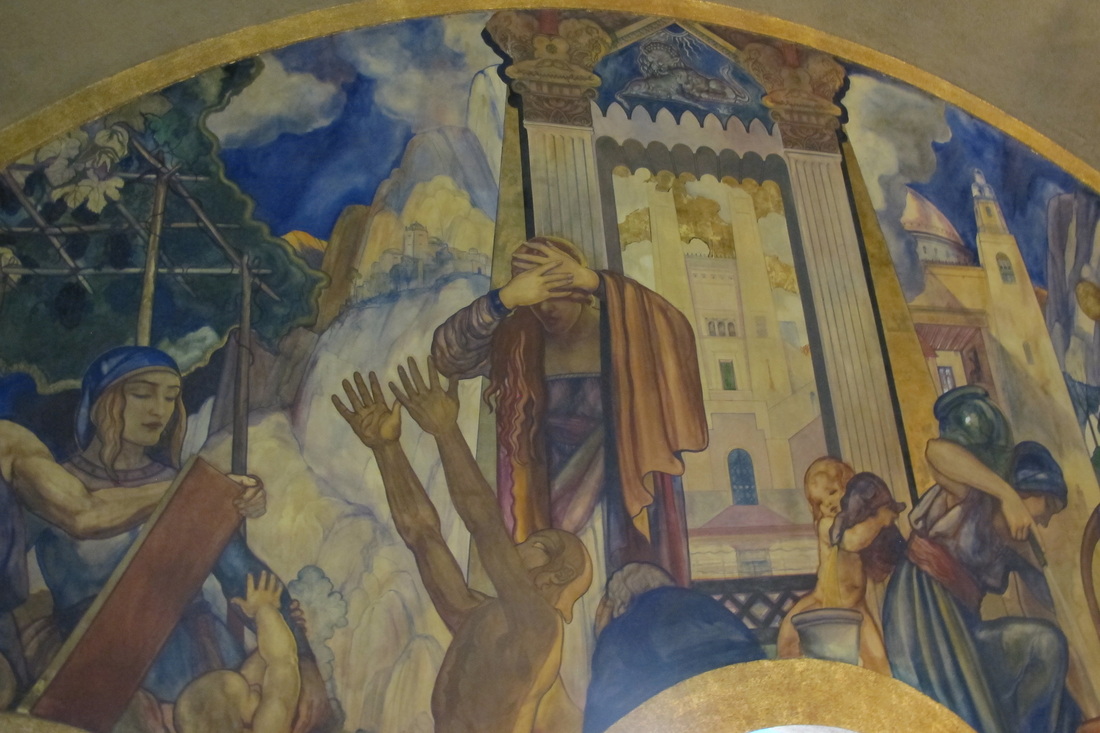 The completed and restored Western Lunette showing the Messianic Age.   Photograph by Tom Bonner
When creating his compositions, Ballin had to consider that his paintings would be high up on a wall, above the eye, and that people would be viewing his murals at a distance of 70 feet.

Author Tom Tiecholz, researching and writing about the history of Wilshire Boulevard Temple, came across an  academic research paper, “Visualizing Jewish History for a Modern Audience,” by Mackenzie Stevens, a graduate student in the University of Southern California’s Art Department. He writes that, "Stevens makes the case that the Warner Murals use many of the techniques of film — faces are spotlighted to draw our attention to them, a focus on characters in the foreground with suggestive thematic elements in the background. Stevens also noted the fact that Rabbi Magnin was a consultant to Cecil B. DeMille’s “Ten Commandments” and that their conceptions of Moses bear a great similarity."

"Just as in silent movies, the characters convey intention and emotion with dramatic gestures or mannerisms that all can interpret. The figures in the Murals are posed in ways that communicate much of their meaning, even to those looking from as far away as 70 feet below. Ballin does this in numerous visual ways by using contrasting colors for the figures and their backgrounds, as well as by surrounding some figures with a halo of Godly light. There is also the delicate way Ballin uses gold leaf and silver highlights to draw the eye to certain figures or features in the murals. The figures in the murals are never static. They are in motion — Josephus being pulled out of the cistern, Rabbi Akiba being tortured or the Egyptian chariots and horses drowning in the Sea of Reeds while other figures are reading, praying or marching. Even in repose, there is always action around them. "
From Tom Teicholz,  Making History: Wilshire Boulevard Temple and the Warner Murals: Celebrating 150 Years of Jewish Life, Vision and Renewal, 2013 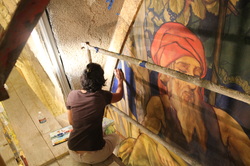 In 2013 the 84 year old Warner Murals were fully restored by the Aneta Zebala Paintings Conservation company as part of the restoration and redevelopment of Wilshire Boulevard Temple's historic campus, now the Erika J. Glazer Family Campus.

To learn more about the restoration of the murals and sanctuary click here.
For additional information about Hugo Ballin, see the website "Hugo Ballin's Los Angeles" by Caroline Luce, http://scalar.usc.edu/hc/hugo-ballins-los-angeles/index
✕