Journey # 6: Josephus and the Sword of Rome: An Eyewitness Account

Mural Description From the Lectures of Rabbi Edgar F. Magnin, 1929-1930:  Jews are seen engaged in study; however (hovering horizontally) above them is the symbolic sword of Rome. In the center circle is Flavius Josephus, a Jewish general and historian, hiding in a cistern (an underground reservoir) to escape the Roman troops. To the right of the circle is a battering ram, used by the Romans to destroy the walls of Jerusalem and the Temple in 70 CE."
Enduring Understandings
Essential Questions
Read in Primary Text: Understanding Jewish History 1,  Sol Scharfstein, Ktav, 1996. The Reign of Antiochus IV: the revolt of the Maccabees, pages 80-81; The Battle for Freedom: The restoration of the Temple, page 82-83; Herod the Great and Economic Prosperity, page 90-91;The Zealots Resist, page 96-97
Ideas to Discuss
Looking closely at this mural section we see the symbolic and threatening sword of Rome hovering over the Jewish scholars, before the destruction of the second Jewish Temple in 70 C.E. What led up to this destruction?

These were times of great Empires in the Ancient Near East. For centuries the strongest and most strategic rulers rose up and conquered the smaller or weaker kingdoms. This was the case when the Assyrians took control of the northern kingdom of Israel in 722 B.C.E, and banished and resettled the ten Israelite tribes far from their homeland. From this time onward, generations of Jews remained in the small but resolute kingdom of Judah struggling  to survive and maintain their Jewish traditions, as more powerful rulers, one after the other, took control of Judah and determined  the fate of the Jewish people:

Josephus: General, Traitor, Historian
During the Roman rule, Judea was divided between two groups of Jews: the Pharisees who advocated for passive resistance to the Romans and dedication to Jewish law, and those that supported armed resistance and revolt against the Romans.  These rebels came to be known as the Zealots. By 67 C.E. the Zealots were rebelling  against the Romans with all their might. During this rebellion,  a Jewish general known as Josephus hid with his fellow fighters in a cistern where water was collected underground. However, he surrendered  to the Romans after the death of his fellow troops who took their own lives to avoid capture. For this allegiance to the Romans, Josephus was considered a traitor by the Jews, but an ally by the Romans who spared his life and sent him to live comfortably in Rome. There he became  famous for the important, historical accounts he wrote of Jewish life in his time. His classic books, "Wars of the Jews" and "Antiquities of the Jews," provide readers with one of the few eye-witness accounts of the era in which he lived, including the final destruction of the second Jewish Temple in Jerusalem by the Romans in 70 C.E. 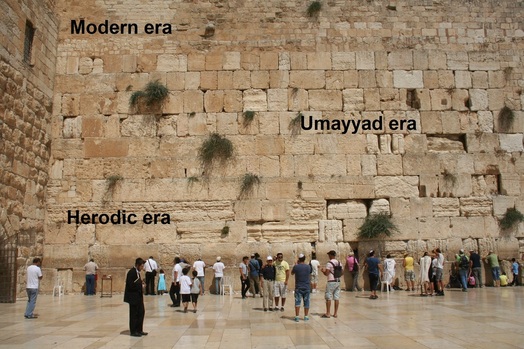 The Kotel provides rich archaeological information about the Second Jewish Temple which the Romans destroyed in 70 C.E.  The enormous lower stones of the Western Wall were placed  by King Herod when he began building up the Temple  in 20 C.E. The medium-sized stones in the middle of the Western Wall were laid down later during the Umayyad era (661-750 C.E) by the Muslim rulers, centuries after the Temple's destruction. The smallest ones at the top were built up during the Ottoman and British rule over Israel.

Activity #1 --Reporting from Judah: Writing a Fictional Eye-Witness Account
The account by Josephus of the destruction of the Second Temple is powerful piece of writing which is still being read by you, almost 2000 years later! Through eyewitness accounts a writer can share an experience with someone who has never seen the event. A writer’s vivid retelling of an experience can create something like a movie in the reader’s mind, allowing him or her to imagine every detail and action.

In this activity, students will put themselves in the shoes of a person living during the Second Temple period. They will write a fictitious “eyewitness account” conveying the drama of the experience.
An Eye-witness Account
The Romans Destroy the Temple at Jerusalem, by Josephus, 70 C.E.
"...the rebels shortly after attacked the Romans again, and a clash followed between the guards of the sanctuary and the troops who were putting out the fire inside the inner court; the latter routed the Jews and followed in hot pursuit right up to the Temple itself. Then one of the soldiers, without awaiting any orders and with no dread of so momentous a deed, but urged on by some supernatural force, snatched a blazing piece of wood and, climbing on another soldier's back, hurled the flaming brand through a low golden window that gave access, on the north side, to the rooms that surrounded the sanctuary. As the flames shot up, the Jews let out a shout of dismay that matched the tragedy; they flocked to the rescue, with no thought of sparing their lives or husbanding their strength; for the sacred structure that they had constantly guarded with such devotion was vanishing before their very eyes. While the Temple was ablaze, the attackers plundered it….Through the roar of the flames streaming far and wide, the groans of the falling victims were heard; such was the height of the hill and the magnitude of the blazing pile that the entire city seemed to be ablaze; and the noise - nothing more deafening and frightening could be imagined...The Temple Mount, everywhere enveloped in flames, seemed to be boiling over from its base.”﻿

Crafting a Powerful Eyewitness Account
Students will write their own eyewitness account as a fictitious diary entry based on one of the events described in their text Understanding Jewish History, by Sol Scharfstein.  As they read the two pages of the story, they will imagine themselves in the shoes of a person experiencing the event. Students will chose one of the following events:
Use the Eyewitness Account Worksheet to instruct your students on how to craft a powerful account. Eye Witness Accounts should include:
After students complete their final draft of their eyewitness accounts, have all students read their account aloud dramatically to the whole class or in smaller groups. Consider compiling a book of all the students accounts in a Second Temple Diary.
journey  #7
✕