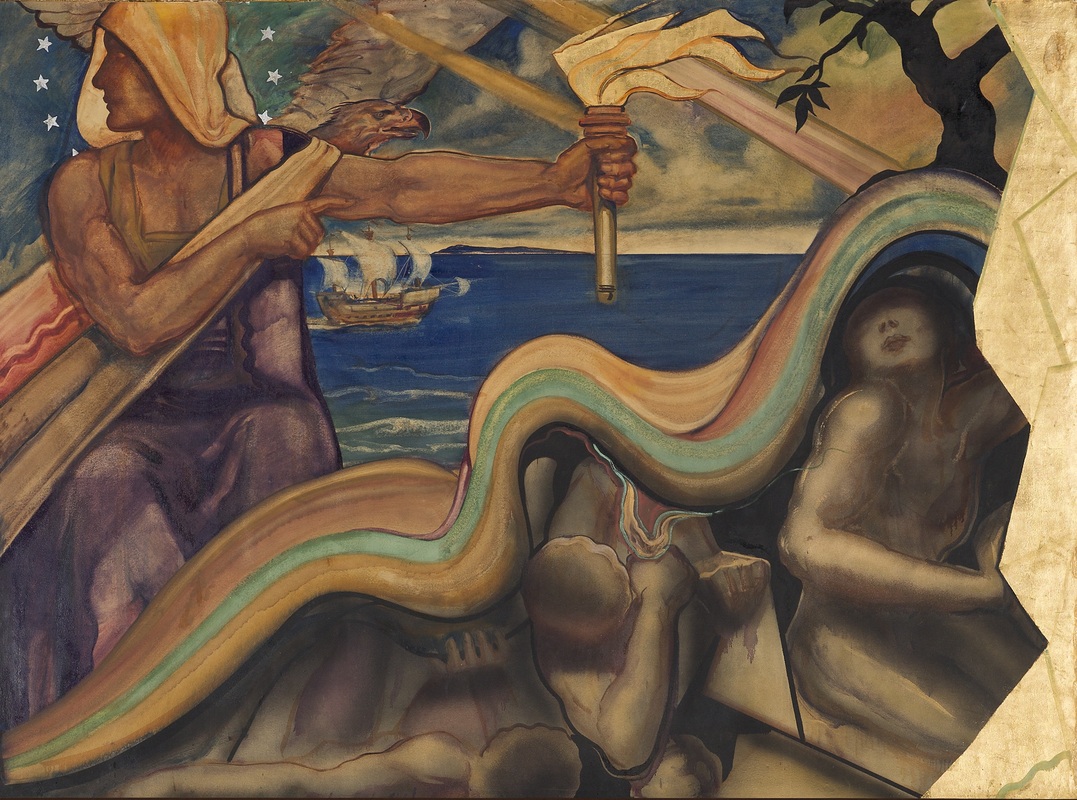 Mural Description From the Lectures of Rabbi Edgar F. Magnin, 1929-1930:  "Holding Forth the Torch of Liberty. Stars are clustered around her head. An eagle above her arm. A ship sailing westward toward the New Land. In the year that Jews were exiled from Spain, America was discovered. Bronze figures below the strata of the earth typifying agriculture, mining and the opportunities of the New Land. The earth's forces struggling upward longing to be developed."
Enduring Understandings
Essential Questions:
Read in Primary Text: Understanding Jewish History 1, Sol Scharfstein, Ktav, 1996. The Jews Leave Spain,  page 160. 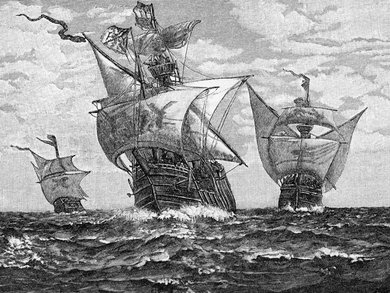 Undated Woodcut. Smithsonian.com
Ideas to Discuss
From the Diary of Christopher Columbus
﻿"The Inquisition and Expulsion from Spain resulted in the same month in which their Majesties [Ferdinand and Isabella] issued the edict that all Jews should be driven out of the kingdom and its territories, in the same month they gave me the order to undertake with sufficient men my expedition of discovery to the Indies." ﻿So begins Christopher Columbus's diary. The expulsion that Columbus refers to was so cataclysmic an event that ever since, the date 1492 has been almost as important in Jewish history as in American history. On July 30 of that year, the entire Jewish community, some 200,000 people, were expelled from Spain. 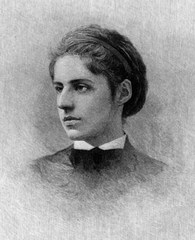 Activity #1 Emma Lazarus: Carrying the Torch of Liberty from Sephardic Lands to the Land of America
Background on Emma Lazarus, Writer of "The New Collossus"
One of the descendants of these early Sephardic settlers to New York was Emma Lazarus who in 1863 wrote the powerful and memorable sonnet "The New Colossus", whose lines were proudly engraved on the pedestal of the Statue of Liberty placed in 1903.

Emma was the fourth of seven children of Moses Lazarus and Esther Nathan, both Sephardic Jews whose families were originally from Portugal. They had been settled in New York since the colonial period. The Lazarus family traced their ancestry back to America's first Jewish settlers. As descendants of this pioneering group of Sephardic (Spanish and Portuguese) Jews, Emma's family belonged to a distinct Jewish upper class. From them, Emma inherited a rich pride in her Sephardic heritage, and often wrote about the medieval scholars and poets of her ancestors' land.

Following the  1881 assassination of Tsar Alexander II in Russia and the political upheaval that followed, mobs of local villagers attacked and murdered their Jewish neighbors in organized attacks called pogroms. As a result of this anti-Semitic violence, thousands of Ashkenazi Jews emigrated from the Russian Pale of Settlement, to New York. More established German Jewish and Sephardic communities in New York looked down upon the new, Yiddish speaking Jewish brethren from "the Old Country."  Many of these new immigrants were religious Jews who struggled with the secular world they encountered. Social reformers such as Lazarus began advocating for these Jewish refugees, who came to America with very little.
She wrote  articles and books on the subject and helped to establish the Hebrew Technical Institute in New York to provide job training. She was a visionary writer, poet, and an activist who also was an important forerunner of the Zionist movement. She argued for the creation of a Jewish homeland thirteen years before Theodor Herzl began to use the term Zionism to describe his mission. The Jewish Women's Archive is a source of excellent biographical information on Emma Lazarus
"I lift my lamp beside the golden door!"--Exploring the Poem "The New Colossus"
Resources for exploring immigration to Ellis Island and America
A virtual tour through Ellis Island from Scholastic Books
History of the Creation of the Statue of Liberty from the National Parks Service
http://www.history.com/topics/statue-of-liberty
From Haven to Home: 350 Years of Jewish Life in America
PBS Documentary "The Jewish Americans (1 & 2): They Came to Stay & A World of Their Own"
The American Jewish Experience: Online Resources
Sources about Emma Lazarus
http://jwa.org/womenofvalor/lazarus
https://en.wikipedia.org/wiki/Emma_Lazarus
Article on Emma Lazarus exhibit at the Museum on Jewish Heritage, NYC
Final Activity:  The Four Corners of the Earth Treasure Hunt-- Family Traditions That Traveled To America
In this culminating activity students will learn techniques for collecting family folklore-- adding their own family stories and experiences
to the 3500 years of Jewish history we have explored. 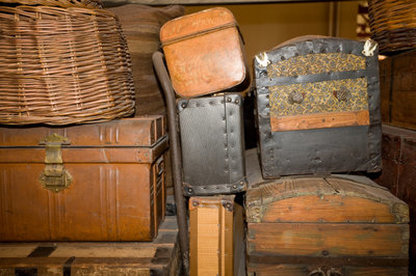 Luggage, Ellis Island Exhibit
Whether your family came to America through Ellis Island in the 1800's, landed before this great influx, or arrived as immigrants in more recent times, America  remains one of the largest homes to the Jewish people in the world. While traveling through 3500 years of Jewish history through the Wilshire Boulevard Temple Murals, we have seen the many routes our Jewish ancestors have taken. Today there are over 14 million Jews in the world, with Israel and the United States accounting for 83% of the Jewish population.


In this project students will interview family members and collect, interpret and share their family stories, traditions, and heirlooms that have traveled from the four corners of the earth to this place in time, and understand how this collective family folklore enriches  who we are as a Jewish community today. 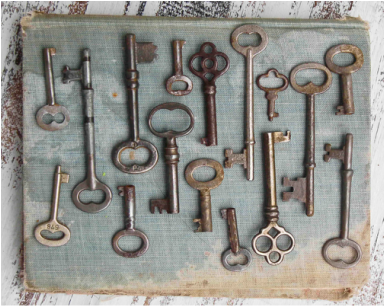 There is a folktale passed down through the generations. Before Spanish Jews departed in exile from their beloved homes in Toledo, Cordoba, Granada, they secretly took the key to the front door of their homes, in hopes that one day they would return. It is said these keys lie waiting in the drawers within the homes of Sephardic families today. Is it true? We do not really know-- and folklorists who collect these stories would say it does not matter if it is true. Folktales such as this speak to more than just the facts of history--rather they help us dramatize our lives and unlock a deep yearning, memory and meaning that speaks truth to us-- generations later.

As we reflect on the final section of the mural, with the ship heading for America, and the shining torch of possibility-- we encourage you to take a symbolic key and use it to open doors to your family's treasures. As the Jewish story is so long and complex, there are many vital chapters of Jewish life and history that the Ballin Murals were unable to depict. We invite you to discover and share the diverse stories that are unique to your family's journey. Together we will continue where Ballin left off and broaden the story of our Jewish people.
"Folklore represents one of the important ways we give life meaning beyond the immediate present.
If we were simply to list all the events of a person's life in chronological order, it would look as much like a shopping list as a lifetime. Using the forms of folklore we order our lives into eras, and organize and dramatize the incidents within them. We become able to both understand and communicate our experiences through our photo albums, our stories and celebrations, the objects we have collected." From A Celebration of American Family Folklore, Steven Zeitlin, Amy Kotkin, Holly Cutting Baker
Family Folklorists are Collectors--they ask questions and record the answers, bring stories to light, and gather stuff hidden in drawers that illuminate what is particular about our family journey.
How to Collect
What to Collect 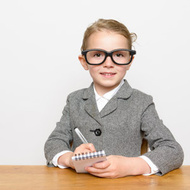 FAMILY STORIES: Teach your students techniques for interviewing relatives so they can collect family stories. Use the "How to Interview Well" handout to prepare your students. Conduct a practice interview with the class, interviewing another teacher, school employee or parent. Coach the class on how to formulate good questions, how to listen well and how to ask productive "follow up questions."  Ask students to write up three questions which they can use in an interview to gather the information listed on the "What to Collect" list above. After you review and discuss their questions, share some of the questions on this "Collecting Family Stories and Folklore--Questions to Ask" questionnaire. After the in-class practice interview, discuss strategies for video recording and documenting their interviews. Using their phone or camera they can later listen to the interviews later and write down key points to discuss in class. Encourage students to use these interviews to also collect jokes, sayings and proverbs their relatives have repeated over the years. 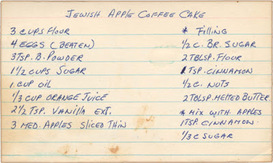 ﻿RECIPES: Talk to the best cooks in your extended family and write down the recipes on one side of a large index card. Note who gave you the recipe and the date. On the back of the card record: ﻿ 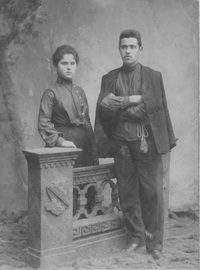 FAMILY PHOTOGRAPHS: There are always some family members: a grandparent, aunt, or cousin who appoint themselves the collector of old family photos. Ask your parents who has the best collections of photos over the generations. Talk to them and ask them to send you scans or copies of the most memorable photos. Pick a theme for the selection of family photos: 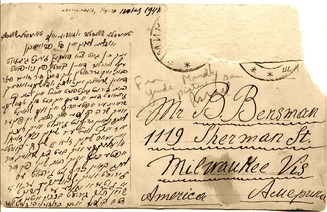 Postcard written in Yiddish
LETTERS, DIARIES AND DOCUMENTS: Ask family members to dig through their drawers and closets and share with you old letters, passports, invitations to family Bar Mitzvahs or weddings. Perhaps there are citizenship papers or newspaper articles, or old postcards in languages from the home country. Maybe there is an old journal or diary or school diploma. Each of these documents holds clues to the past, and tells stories about the family member's life and journey. 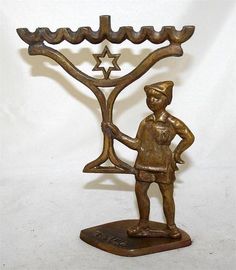 Hanukkah Menorah Bronze Israel Circa 1950s
HEIRLOOMS:  meaningful objects that have been passed down through the generations.

PRESENTING FAMILY FOLKLORE: To weave together and present the diversity of the American Jewish experience represented in the family folklore collected by the students, select a  project below to interpret, share and present.