Mural Description From the Lectures of Rabbi Edgar F. Magnin, 1929-1930: Amos--Ninth Century B.C.E. was the first great literary prophet. He was a herdsman of Tekoa. Amos conceived of God as perfect justice, and the Lord of all nations. He predicted the doom of his people on account of their sins and intimated that they would be conquered by Syria. God loved Israel and Judah, whom he had chosen to teach righteousness to the world, but for this very reason would hold the, guilty for their sins. Amos was an exponent of social justice and prayed for the widow, the orphan and the poor. "


Also on this spandrel arch: The head of Assyria with the triple pupil in the eye. Assyria captured the northern capital of Samaria and deported the Northern Israelites. In the medallion is Haggai and Zechariah who were prophets during the 6th century and who aided in rebuilding Jerusalem and the second Temple. The head above the Arch typifies Egypt and Chanukah candles and the Grecian face typify the Greek period of Jewish history and the Maccabean triumph. Below to the right, a little border town of the period."
Enduring Understandings
Essential Questions
Read in Text: Understanding Jewish History, Volume 1: From the Patriarchs to the Expulsion of Spain, by Sol Scharfstein. Prophetic Voices, Page 40-41; Elijah and Elisha pg. 41- first paragraph page 43; A Time of Prosperity: Amos Speaks for Justice, pg. 46,
Activity #1 The Voice of the Prophet
BEFORE you introduce the role and voice of the Prophets, before you explain ANYTHING about the Prophets, invite the students to encounter and interact with their words on their own terms. After students immerse themselves using the approach below, they will discover more about the motivation of the Prophets-- and what we can learn from them today.
What emotion is being communicated in the words?
What does the author wants you to feel?
How does the author want you to act?
What might be the purpose of this communication?
Ideas to Discuss 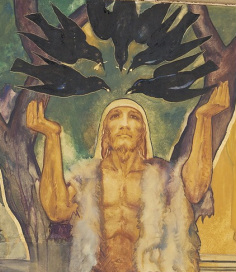 What is the Role of a Prophet?
Opening Our Door to Elijah
The WIlshire Boulevard Temple Mural depicts an image of the prophet Elijah, hands raised, being fed by a flock of black ravens.  This is indeed the Elijah to whom we open the door during our Passover Seder while  singing  "Eliahu ha Navi!" There were many kinds of prophets in Biblical times--and their words and deeds remind us to live up to the laws put forth in the Torah.

We know about Elijah from writings in the book of Kings. He lived in the first half of the ninth century B.C.E. and is known as one of the "pre-literary prophets" who did not write down his teachings. Instead, the Bible describes the consequences of his actions. Elijah is a heroic figure in Jewish tradition. It is he who stands up to King Ahab, when his Phoenician wife introduces the worship of the idol Baal into the Jewish Kingdom. In Kings 17 we learn that the Lord protects Elijah when he criticizes King Ahab's deceitful behavior, instructing him to flee the Kings' wrath to a watering hole in the desert, where " you will drink from the wadi, and I have commanded the ravens to feed you there.”

Elijah defines the role of the prophet of his time; if Israel's kings do not rule in the name of God, the prophets must speak out and remind them. Stories of miracles are connected to Elijah and legends persist that Elijah's  spirit  still walks among us, knocking at our door, to remind us to that our small daily actions should honor the laws and values of the Torah. 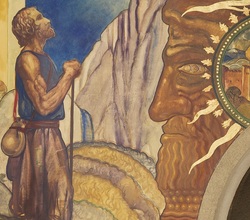 Amos and The World of the Classical Prophets
Amos was one of a handful of "Literary (or Classical) Prophets"  who intentionally recorded  their words, speeches and concerns in writing. These texts were collected in the section of the Tanakh called The Prophets or Neviim in Hebrew.

The classical prophets came on the scene in the middle of the eighth century BCE, approximately 150 years after the death of King Solomon and the division of the monarchy into the northern kingdom of Israel and the southern kingdom of Judah.

Amos was a herdsman, born in the town of Tekoa, west of the Dead Sea. He lived around 760 B.C.E.  This was a time of religious, political, and social instability. In the North, Israelite’s were going back to the idol-worshiping practices of the neighboring tribes. The wealthy and privileged were growing richer while and the common people were sinking deeper into debt and misery. Slavery was on the rise.  Did the wealthy have pity or concern? “ Quite the contrary," said Amos. “They would trample the head of the poor into the dust of the earth and push the humble out of the way”  (Amos 2:6)

Isaiah was another strong and influential Prophet who lived at this time. Prophets like Isaiah and Amos lashed out against this disregard of the poor. They also spoke out against the "empty ritual" they saw, which was not accompanied by good deeds. For example, Amos opposed performing ceremonies, such as bringing rich offerings to the Temple, if it was not done hand in hand with caring for those in need. He saw this as a misuse of religion.  Deeds counted more then sacrifices at the Temple, the prophets declared. Amos’ message was that the people of Israel must not think its Covenant with God gave them special privileges, but that rather demanded that they keep the laws of the Torah. The idea that God cared how people treated each other was revolutionary. Five centuries after Moses, it had still not been truly grasped. The role of the prophet was not to read the future but to predict the consequences of the Israelites actions, that they chose to ignore. 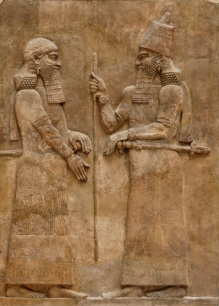 Sargon II and Dignitary
The Prophets and the Fall of of the Northern Kingdom of Israel
Amos was the first in a chain of prophets to warn the Northern Kingdom of Israel about the creeping threat of the Assyrians. They had  already conquered all of Babylonia, which lay to the north of Samaria, the capital of Israel. The  map above shows Samaria and Judah surrounded by the Assyrian Empire.

By 721 B.C.E., after years of desperate revolts and warfare,  Samaria was conquered by Assyria. As it was Assyrian policy to deport conquered peoples far from their homelands to discourage their return and revolt, the northern tribes were scattered throughout their empire.  As the northern kingdom ceased to exist, the southern kingdom of Judah watched with alarm-- and realized the insight and power of the words of the Prophets.

On the wall of his palace at Dar-Sharrukin (modern Khorsabad) the Assyrian King Sargon  II recorded:
"In my first year of reign the people of Samaria to the number of 27,290 ... I carried away."

The Northern Tribes: Reuben, Simeon, Issachar, Zebulun, Dan, Naphtali, Gad, Asher, Joseph, Benjamin
We do not know what happened to "the ten lost tribes of Israel"--as the banished Northern tribes came to called. It is assumed they mingled with, and became part of, the pagan tribes of the region they lived in.  Over the centuries many peoples around the globe have claimed descent from the ten tribes. In the past decades, the contemporary Jewish community has accepted at least one group claiming to be descended from a lost tribe: the Beta Israel, or Jews from Ethiopia, who claim to trace their lineage to the tribe of Dan.
Activity #2   THE MESSAGE OF THE PROPHETS TODAY:  "Praying With Your Feet."


In the activity below students will be introduced to the ideas and actions of Rabbi Abraham Joshua Heschel and how the ideas and words of the Prophets inspired him to take action against injustice during the fight for civil rights for African Americans in the American South. 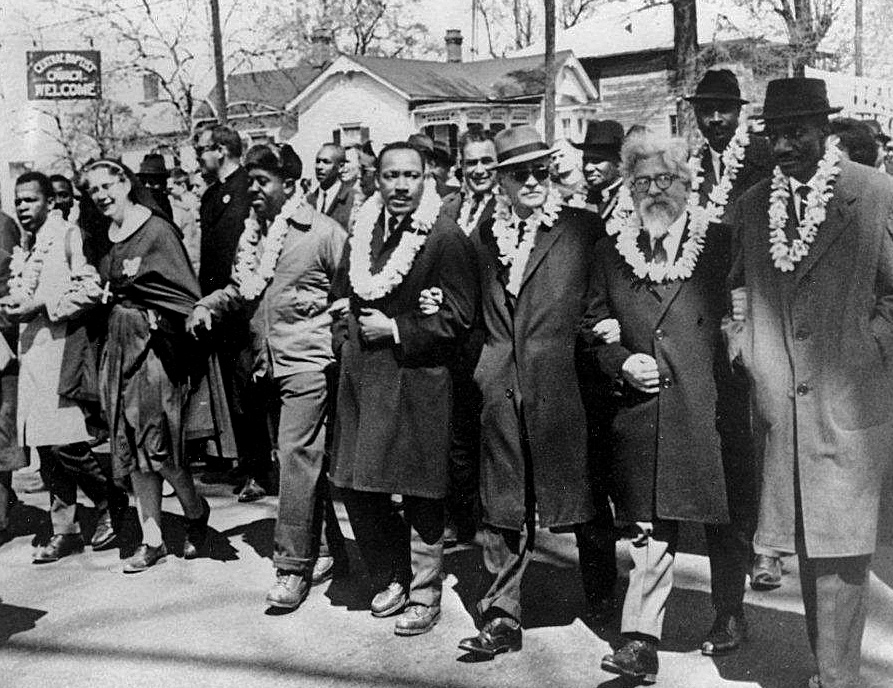 Rabbi Abraham Joshua Heschel (second from right) marching from Selma to Montgomery, Alabama in 1965 to support voting rights for back Americans.
Ideas to Discuss
Abraham Joshua Heschel was a great Rabbi, thinker, writer and activist who wrote passionately about the lives of the Prophets, and lived his life inspired by their message. Heschel believed that one worships God through taking a stand against injustice; he said, "the opposite of good is not evil, the opposite of good is indifference."

DISCUSS:
Heschel was a close friend and supporter of Martin Luther King and spoke out in support of the civil rights movement which demanded equal rights for black Americans. During the civil rights movement in 1965, Heschel linked arms with Martin Luther King at the head of a protest march from Selma to Montgomery, Alabama where 25,000 people gathered to demand voting rights for the black residents of Alabama.

After participating in the civil rights march in Selma, Alabama, Rabbi Abraham Joshua Heschel said,
"For many of us the march from Selma to Montgomery was about protest and prayer...Even without words, our march was worship.  It felt like my feet were praying. Prayer is not just the communication we have with God; it is also the work we do to make God’s values real to the world. I think God listens to both kinds of prayer with equal joy."

DISCUSS:
The Birmingham Children’s March:  What Does it Mean to “Pray with your Feet?"
Watch and discuss this short film, No More: The Children of Birmingham 1963 and the Turning Point of the Civil Rights Movement.  The film was created by high school filmmakers about children and teens in Birmingham Alabama, who in 1963, at the height of the Civil Rights Movement “prayed with their feet” and took action against injustice. It was created by Miranda and Mckay Jessop for a school project. After screening the ten minute film discuss the questions below.

DISCUSS:
Activity #3  Reform Judaism and the Message of the Prophets
Since its founding in 1889, the Reform Movement's Central Conference of American Rabbis has produced statements that give new voice to prophetic Judaism, and that govern, guide and express current views of Reform Rabbis. This is an excerpt form the resolution Adopted by Reform Movement rabbis at the 1999 Pittsburgh Convention of the Central Conference of American Rabbis, May 1999 - Sivan 5759
Click here for the complete resolution

“We are obligated to pursue (tzedek), justice and righteousness, and to narrow the gap between the affluent and the poor, to act against discrimination and oppression, to pursue peace, to welcome the stranger, to protect the earth's biodiversity and natural resources, and to redeem those in physical, economic and spiritual bondage. In so doing, we reaffirm social action and social justice as a central prophetic focus of traditional Reform Jewish belief and practice.”

What Events Move You to Action?
﻿Use the written word to develop your ideas and speak out on issues that matter to you. The Biblical Prophets, Abraham Joshua Heschel, the children of Birmingham, and rabbis within the Reform Movement are all driven to speak out when witnessing injustice.
In the lesson below, students will produce writing and use it to speak out to the community. ﻿
Resources
Abraham Joshua Heschel: A Prophet's Prophet:  the ideas of A.J. Heschel
Article by Susannah Heschel on the Relationship Between Abraham Joshua Heschel and Martin Luther King, Jr.
Heshel, Abraham Joshua,  The Prophets, Harper and Rowe,
Goodman, Hannah Grad, The Story of Prophesy, Behrman House, 1965