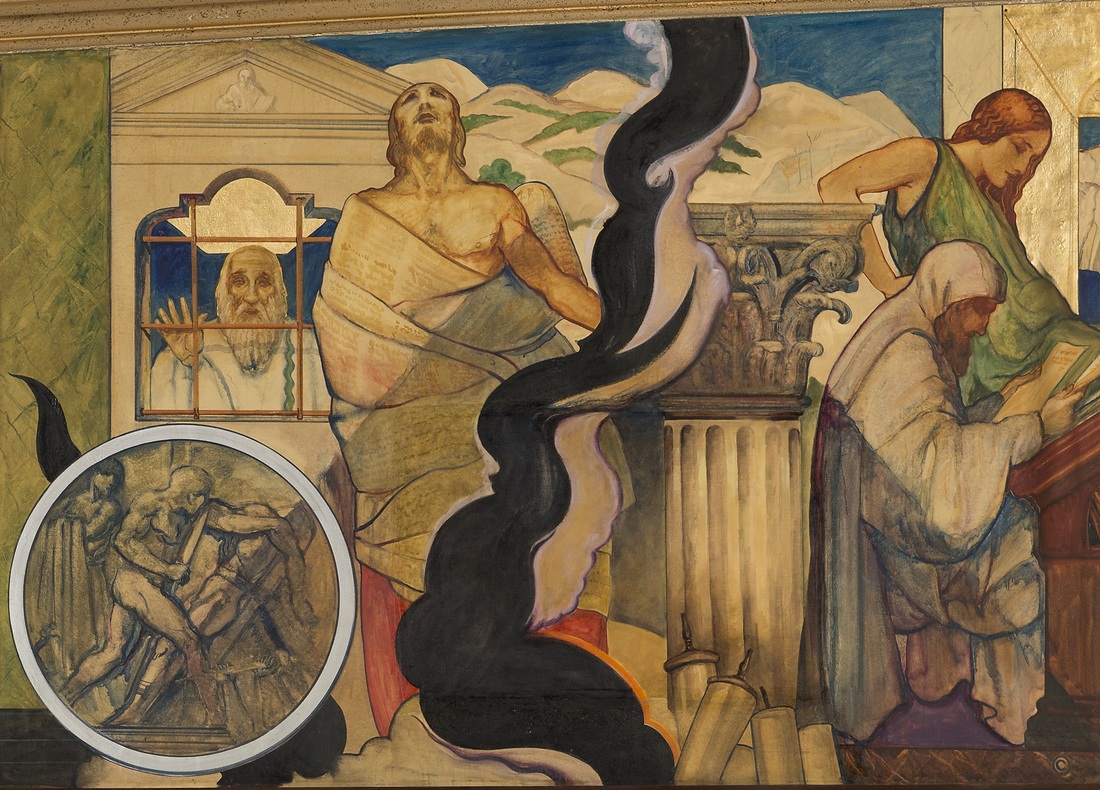 Mural Description From the Lectures of Rabbi Edgar F. Magnin, 1929-1930: Akiba ben Joseph (seen in the mural behind bars in prison and being killed by the Romans below) was great scholar who died the death of a martyr for helping to bring about the Bar Kochba revolt against the Romans in Palestine in 135 C.E. Rabbi Hanina is seen wrapped in a Torah scroll with the flames enveloping him. He was also a great teacher and one of the "ten martyrs", arrested and killed by the Romans for teaching Torah in defiance of a Roman rule against practicing Judaism. The rabbi sitting at his desk  is Rabbi Meir, the favorite pupil  of Rabbi Akiva, and  his wife standing over him is Beruriah, daughter of Rabbi Hanina. She was known as a great scholar and is one of several women quoted as a sage in the Talmud."
Enduring Understandings
Essential Questions:

Activity  #1: SEE-THINK-WONDER--Insights from Ballin's Mural
﻿Drawing upon visual thinking strategies students will look closely at this section of  Ballin's mural image in order to develop greater insights about the the motivations and experience of the great Jewish scholars represented here. Before explaining what this image depicts, or reading the Scharfstein text, have your students encounter, and grapple with, the image itself. ﻿

Project the image above and print out color copies for students to look at in pairs.
Discuss and share the collected interpretations and wonderings about the images. After, use  Magnin's description and the biographical information below to explain what is going on in this section of the mural. Have students read the stories in the text to learn more about Rabbi Akiva and this time period.
The See-Think-Wonder activity above  is inspired by the book Making Thinking Visible: How to Promote Engagement, Understanding , and Independence for all Learners, Ron Ritchart, Mark Church and Karin Morrison. 2011
Ideas to Discuss:
What Was Going On?  Faith, Wonder and Sacrifice
After the students do their own visual interpretation of the mural image, have them read the story of Rabbi Akiva in their  primary text  Understanding Jewish History 1, Sol Scharfstein, Ktav, 1996. "Rabbi Akiva and the Mishnah", pg. 106 and "Bar Kochba's Revolt", pg. 108-109, as well as the text below.

﻿This section of the mural illuminates the intense faith of four great Jewish scholars: Rabbi Akiva, Rabbi Hanina, Hanina's daughter Beruriah, who is one of the few women scholars to be mentioned in the Talmud, and her husband the Rabbi Meir,  pictured beside her.
The time that these heroic Jewish scholars lived was a time of great change in the land of Judea. The Roman's continued to rule the region, while the Jews devised new prayers and new ways of worshipping in the synagogues and houses of study that replaced the Holy Temple.

We know about Rabbi Akiva, Hanina, Meir and Bruriah through stories we read about them in the Talmud, which are the volumes of text containing the Mishnah and the commentaries and explanations by generations of Rabbis and scholars. We will explore this further in the next lesson.

Ask students to take turns reading the short introductions to the four scholars below:
Source: Joseph Teluskin, Jewish Literacy: The Most Important Things to Know About the Jewish Religion, Its People and Its History, 1991.
A Conversation through the Generations: The Oral Law is Collected and Preserved
Rabbi Akiva is described as the first compiler of the Oral Torah (Torah Shebal Peh). The Written Law is another name for the Torah. The Oral Law is a commentary on the Torah, explaining how in daily life its commandments are to be carried out. This is also known at the Misnah.

After the failed Bar Kochba Revolt, which resulted in the death of many students and a large portion of the Jewish population, the need to compile and organize the Torah Shebal Peh became urgent. Akiva set his brilliant mind the task of initiating  this project. For generations, the rabbis and sages sought to communicate the Oral Law from teacher to student. Each generation learned from the previous one and students learned by repeating what they heard. During the Roman period in Judea, (beginning in 63 B.C.E.) restrictions were placed on the study of Torah—both written and oral. As Torah study became more uncertain and dangerous, rabbis and others in the community were concerned that the teachings would not survive if the Oral Law was not written down.

Akiva's work was continued by other great scholars, most notably Judah Hanasi. After the Great Revolt and the Bar Kochba rebellion over a million Jews were killed, including thousands of rabbinical scholars and students. By 200 C.E. it was clear that if the Oral Law were not recorded in writing it could be lost and forgotten. These collected writings came to be called The Mishnah. It includes 63 tractates into which every law in the Torah is organized by topic. For example if a person wanted to find all laws about the Sabbath in the Torah, he would have to read through many books of Torah. Judah Hanasi made it easier by compiling all texts about the Sabbath into a  tractate or section called Shabbat. It includes the text from the Written Torah as well as all the discussion and knowledge from the Oral Torah. The word Mishna means “repetition” and refers to the collection and editing of the oral traditions of the Jews. These traditions were passed down from generation to generation until finally completed after 550 years by Judah Hanasi in the third century C.E.

The Mishnah categorizes all Jewish knowledge into different topics and makes it easy to locate and learn about Jewish teaching and practice. 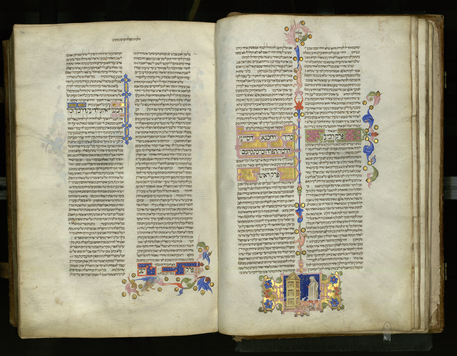 The stories and laws that were handed down were organized under different subject headings called "orders" (Hebrew: sedarim, singular seder סדר) which deal with a broad area of Jewish life. These are:
Activity #2  Your Comments Count: Understanding Rabbi Akiva and Beruria by Working in Hevruta For the original Rabbi Akiva text in the Talmud with commentaries click here
For more information on the life and Talmudic texts about Beruruah click here
journey # 10
✕